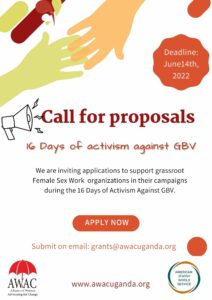 The Alliance of Women Advocating for Change (AWAC) is an umbrella network of grass-root female sex worker led-organizations in Uganda, established in 2015 to respond to FSW’s SRHR needs, HIV related stigma and discrimination, promote meaningful involvement, collective organizing to strengthen a vibrant, unified, resilient and sustainable feminist grassroot FSWs movement that advocate for human rights & social protection, economic justice for FSWs and those with intersecting vulnerabilities such as: FSWs living with disability; FSWs Using or Injecting drugs; Indigenous FSWs in hard to reach areas; Refugees FSWs in urban setting; FSWs living with HIV/AIDS; Elderly FSWs; adolescents and young adults engaging in sex work; Children of FSWs and children with destitute conditions surviving in the sex work settings in Uganda.

AWAC Mission: “To build a resilient movement of female sex workers’ that advocates for sustainable integrated universal health care, promotion of human rights and social protection, economic justice for FSWs and those with intersecting & Compounded vulnerabilities in Uganda”.

AWAC Vision: “An inclusive policy and social environment where grassroots FSWs and those with intersecting & compounded vulnerabilities live healthy and productive lives that are free from human rights abuse in Uganda”.

Violence against women and girls is one of the most olden, widespread and distressing human rights violations in the world. Inspite the efforts to address it in Uganda, the vice persists with 56% of women experiencing spousal violence and sexual violence . Currently, Uganda has an estimated population of 42.86 million people with an estimated over 1.4 million (5.7%) people living with HIV . Gender based violence (GBV) is among the impediments hampering full realization of HIV and Sexual Reproductive Health better health outcomes. GBV is understood as any act of violence directed at individuals on the basis of their gender. The predicament disproportionately affects women and men due to power imbalances in the society, social processes and socially constructed gender norms. UDHS 2016 shows that women are more than twice as likely to have experienced GBV, essentially sexual violence at some point in their lives as men (one in five or 22% for women; one in 10 or 8% for men). This translates to more than one million women exposed to gender-based violence every passing year in Uganda , . According to the UNWOMEN prevalence data on different forms of violence against women in Uganda, it show that, Lifetime Physical and/or Sexual Intimate Partner Violence: 50% , Physical and/or Sexual Intimate Partner Violence in the last:12 months: 30 %, Child Marriage: 40 %, Female Genital Mutilation :1%, Gender Inequality Index 121 position (a composite measure reflecting inequality in achievements between women and men in three dimensions: reproductive health, empowerment and the labour market ).
Despite of the existing policy frameworks, elimination of violence against women is still a largely unaddressed human right violation affecting FSWs and other vulnerable AGYW in sex work contexts. Female sex workers (FSWs) are still a minoritized population being affected by unequal power relations emanating from systemic exclusion and discrimination which escalates occurrence of GBV. The International Labour Office classifies sex workers as a high-risk group to GBV largely caused bylaw enforcement officials, intimate partners, families, neighbours, clients, brothel owners and other controllers . The illegality of sex work in many countries including Uganda further inhibits sex workers ability to report GBV and negotiate safe sex with clients. GBV has been linked to high rates of morbidity and mortality including gynaecological problems, mental health problems, substance dependence, suicide, and sexually transmitted infections including HIV.

Its against the context above that AWAC through its ongoing project titled; “Bolstering organizational capacity for sex workers’ leadership in Uganda” with funding from the American Jewish World Service, is inviting applications for the 2022 Sixteen Days of Activism Against Gender Based Violence on "Grassroot movement building and intersectional SRHR advocacy for female sex workers and adolescent girls and young women”. AWAC will consider applications from female sex work organizations or groups, particularly those led by young women or girls, to educate/build capacity, and raise awareness on GBV through use of an intersectional lens. This implies the applicant will have to integrate a focus on SRHR issues, Bodily autonomy and integrity of female sex workers in their diversity or with an intersection of multiple vulnerabilities to address the plight of violence and abuse against Female Sex Workers (FSWs) and Young Women and Girls in sex work settings.

1.2 Objectives of the Campaign
To raise awareness of the negative impact that violence and abuse have on FSW, AGYW and those with a multiplicity of vulnerabilities and how this can impede their bodily autonomy and integrity.

To build a resilient grassroot sex work movement that will attract stakeholders’ support and build a critical mass of grassroot FSW in the fight to eradicate violence against FSW and AGYW in sex work contexts as tandem to harnessing access to intersectional SRHR rights.

To sensitize communities to promote collective responsibility, solidarity and cooperation in the fight to eradicate violence against the FSW, and AGYW, in sex work context.

Fill out the proposal and budget template attached on this call in the download section.