Alliance of Women Advocating for Change•Blog 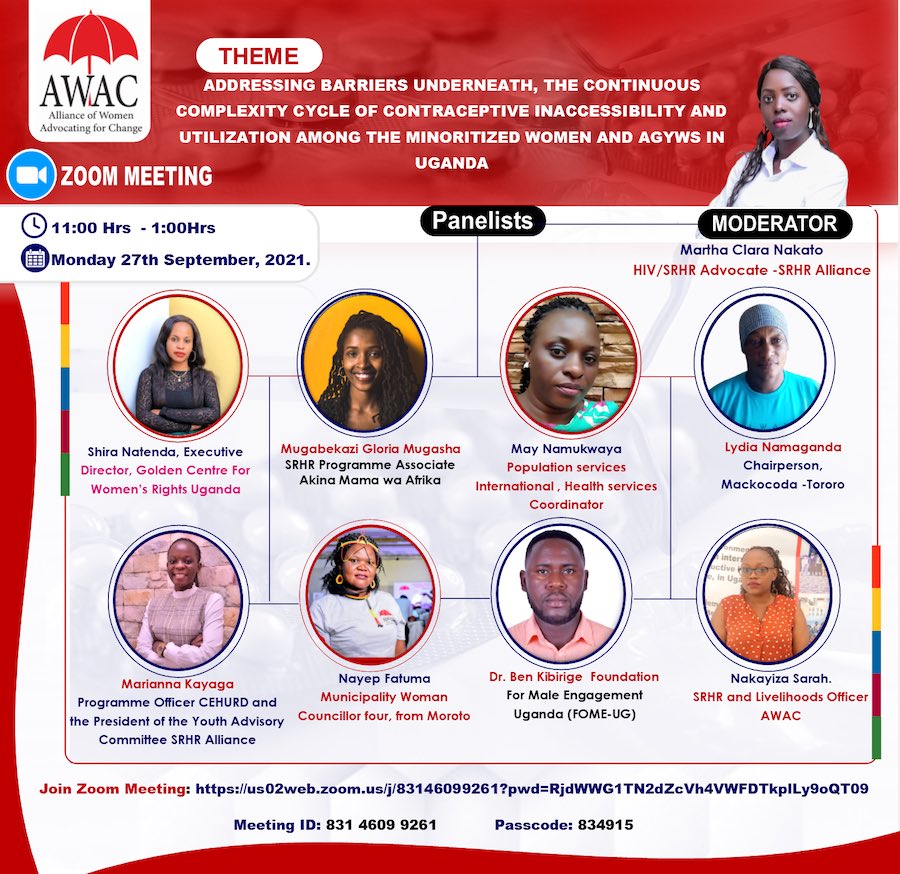 Kampala, Uganda | THE INDEPENDENT | HIV advocates have condemned the continued harassment of sex workers especially by police officers under the guise of enforcing the standard operating procedures (SOPs) against Covid-19 to defraud them of their money.

Speaking to journalists on Wednesday, Macklean Kyomya, the Executive Director at Alliance of Women Advocating for Change (AWAC), an organization that advocates for rights of key populations, said that they have recorded complaints of officers breaking into hotel rooms and arresting sex workers while threatening them to pay bribes.

She says that during the recent police raid on a guest house in Rubaga division, the sex workers claim to have paid not less than Shillings 100,000 for their freedom.

Calling on the President not to assent to the controversial Sexual Offenses Bill that was approved by parliament in May, Kyomya said the police are already warming up for its operationalization since it criminalizes sex work.

According to Kyomya, they have rescued nine sex workers who were being held in custody and they reported majority of their colleagues to have paid their way out of detention.

While the curfew that starts at 7pm has pushed sex workers off the street, another activist Richard Lusimbo says the women have found themselves in a hard place without food yet they are not considered among the needy to receive the Shillings 100,000 COVID-19 cash relief from the government.

He pushes for inclusiveness of key populations in programming such as sex workers, prisoners and injection drug users among others whose needs should be prioritized since already some national policies and programmes like the National HIV and AIDS strategic plan have recognized them.

But Dr. Daniel Byamukama who heads the HIV Prevention at the Uganda AIDS Commission says this is hard at the moment given the societal prejudices, especially the call to repeal laws criminalizing sexual activity and sex work.

He however notes that the commission is set to conduct a legal environment assessment. In this exercise, he says even the sexual offenses bill, which is not yet assented to will be evaluated. He says the consultants will among others ask communities and other stakeholders their view about the legal regime in relation to the HIV/AIDS response.

The report from this assessment will then act as a guide or reference book for MPs when legislating such issues as human rights and HIV.

Yesterday we received food relief items and masks from @NAFOPHANU. This food relief will go to AGYWs and our members, including those in care straggling with ART/PrEP adherence to due to inadequate food availability. 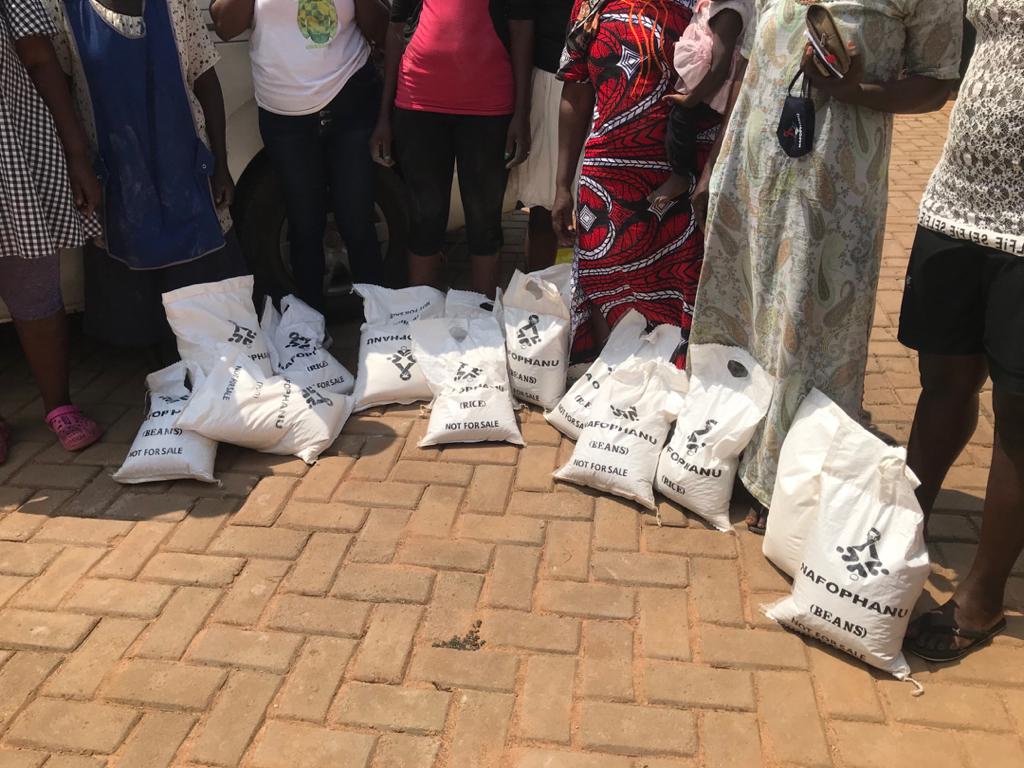 During this time of great uncertainty we have been supported, encouraged, and humbled by the outpouring of generosity and support from our partners.

Our gratitude goes to NAFOPHANU

“You have to live a double life.” Daisy Nakato Namakula, 38, has spent the last two decades in the sex industry in Uganda. The East African nation criminalizes ”sexual intercourse or other sexual gratification for monetary or other material gain” in its penal code, but the stigma alone is enough to enforce a culture of secrecy.

“You cannot be open about where you live and work,” she said. “You have to lie to your neighbors and children — telling them you do a [different] business — for you to be safe and comfortable.” Still, it remains a primary form of income for many — predominantly women and members of sexual minority groups — who see it as their best option to make a reliable living wage.

The job comes with significant risks: Sex workers face the constant threat of police raids, monetary fines, and sexual exploitation by clients and police officers, with no legal recourse to report this abuse when it occurs.

And in recent weeks, the work has become even more dangerous: New legislation is triggering a crackdown on the sex industry, especially in rural districts and low-income areas.

The consequences of this new legislation will fall heaviest on women and marginalized groups during an already fraught year, as COVID-19 continues to ravage the health and economic security of many Ugandans.

Human rights organizations and activists have condemned the bill, claiming that it infringes on the rights of consenting adults. “We’ve always wanted to have a safe working environment, but now it’s going to be the opposite of what we have been advocating for,” said Namakula, who now works as the national coordinator of the Uganda Network for Sex Worker Led Organizations (UNESO), an advocacy network that partners with public health and government officials to support the safety and wellbeing of sex workers.

Namakula worries that the bill will be a significant setback to UNESO’s organizing capacities. UNESO leaders have been working to organize a dialogue between the Ministry of Health and sex workers’ advocates across Uganda, but those discussions have been delayed due to current COVID-19 lockdown restrictions, which prevent gatherings of more than 20 people. “The national dialogue was going to be very helpful in bringing every player on board,” she said, “but now that it may not happen soon, we are trying to strategize to make sure we engage everyone.”

As the bill awaits signing by President Yoweri Museveni, its repercussions are already being felt within the community. “There is a lot of tension,” said Kyomya Macklean, executive director of the Alliance of Women Advocating for Change (AWAC), a grassroots initiative calling for better health care access and economic opportunity for women sex workers in Uganda. “Police in the rural districts are intimidating people, saying, ‘If [the president] signs that document, you are dead. You should find another way to survive.’”

Many sex workers have retreated into hiding, no longer attending support groups or seeking health care services like STI testing, birth control, and PrEP for HIV prevention. “This act is really going to take us back,” said Macklean, who feels betrayed by the government and frustrated that the concerns put forth by the sex workers’ movement are not being heard. “If the president has not even signed it yet and this is already happening, what is going to happen if the bill is actually signed into law?”

Rather than protecting the rights of those in the sex industry to access healthcare or justice in cases of abuse (challenges they face on a day-to-day basis), advocacy groups argue that this bill only contributes to a culture of abuse, making sex work seem inherently like a dishonorable occupation.

“The term ‘sex work’ represents what we do, and it’s not derogatory,” Namakula explained to me. “We even have a term in our local language, Nekolera gyange, meaning ‘entrepreneur.’” Using these terms, she said, helps legitimize the profession. “You wake up, you dress up, and you go out knowing you are going to make money,” she said. “You go out with intention — not just loitering around looking for people to sleep with.”

Occasionally, Namakula said, there will be cases in which a sex worker is coerced into the work by a relative or stranger, who then takes any money she makes for themselves. To this point, Namakula emphasized the importance of agency and personal choice. “As a movement, we strongly disagree with trafficking,” she said. “We believe someone should be above 18, able to make their own decisions, and choose to be in the industry — not forced.”

Namakula, Macklean, and other advocates have been working for years to end the cultural stigma against the sex industry in Uganda and to campaign for decriminalization. For them, that starts with countering the prevailing narrative that sex work is always a last resort. “No one believes that you can wake up and make a decision that you want to be a sex worker, and yet we have,” said Namakula. “There might be other options, but you feel like being a sex worker is the best option for you.”

Namakula worked in food service in her early career but wasn’t able to make a reliable salary. Sex work, she said, gave her financial stability. “When you have money, you are an empowered woman,” she asserted. “You decide which house to rent; you decide what to eat; you decide what to do with your life.”

Regardless of what motivates someone to enter into the sex industry — financial opportunity, family circumstances, personal history, or otherwise — Macklean said that decriminalization would help make the industry safer and protect those vulnerable to mistreatment.

“Sex workers should be left to operate just like any other profession in the country,” she said. “If we can do that, it would give us a way to protect the young minors [getting involved in] this business. We would be able to track those who violate the rights of sex workers and report [those] cases.”

Macklean wants to see a legal distinction between adult sex workers who work of their own free will and minors who are coerced into the industry — the latter of which should not be considered sex work, both women adamantly assert. Decriminalization would also allow for laws protecting sex workers from being denied health care services or subjected to blackmail.

One significant issue right now is sexual and financial exploitation of sex workers by police — something made worse in the wake of this new legislation. “We use a lot of out-of-pocket money to bail ourselves and others out,” Macklean said. Officers will raid a brothel and ask for US $50 or $100 per sex worker to keep everyone out of detention. Worse, they may solicit free sex from a sex worker as a means of bail. “They’ll say, ‘If you want to go home, you know what to do,’” she said.

Even if a sex worker acquiesces, the officer often brings her right back into detention afterward. “You are traumatized, you are being abused, [and] the police probably don’t even have condoms,” Macklean said. “You are being put at risk.”

On the health front, decriminalizing sex work could aid in Uganda’s fight against HIV. Uganda’s HIV rates are among the highest in the world: an estimated 1.5 million people in the country are HIV-positive, or 6 percent of the population. Sex workers are an especially vulnerable group by nature of their industry — around 31 percent of sex workers are currently living with HIV.

Namakula worries that the Sexual Offenses Bill will discourage productive relationships between health providers and sex workers. While it is not illegal to provide these services to sex workers, health providers may shy away from doing so for fear of police retribution. “When you are offering health services, you are also ‘aiding and abetting’ the industry,” she said. “So, it will now be very challenging for sex workers to come out to access services.”

Namakula and Macklean, with their respective organizations, are ultimately fighting for the right of sex workers to live and work freely, just like anyone else. “I am still a human being,” Namakula said. “I am still a woman and so many things besides what I do for a living. As much as I am a sex worker, I also have a right not to be arrested or violated or treated differently.”

The legal landscape continues to be stacked against the movement, yet its advocates aren’t backing down. “If we can decriminalize,” said Macklean, “it will be safe for us to work, look after our family, and continue with a good life like any other profession.”