Press Statement; Addressing the Gender-Based Violence Against the Female Sex Workers And Those in Humanitarian Settings

Alliance of Women Advocating for Change•Blog•News•Press Statement; Addressing the Gender-Based Violence Against the Female Sex Workers And Those in Humanitarian Settings

“UNiTE” Activism To End Violence Against Women and Girls 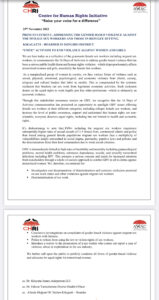 We are here today as a collective of the grassroots female sex workers including migrant sex workers, to commemorate the 16 Days of Activism to address gender-based violence that has been a serious public health threat and human rights violation –which disproportionately affects minoritized women and girls, essentially the female Sex workers. As a marginalized group of women in society, we face various forms of violence such as sexual, physical, emotional, psychological, and economic violence from clients, society, religious and cultural leaders that label us misfits. This is compounded by the systemic exclusion that brackets out sex work from legitimate economic activities. Such exclusion denies us the equal rights to work legally just like other professions –which is ultimately an economic violence.  Through this stakeholder awareness session on GBV, we recognize that the 16 Days of Activism commemoration has presented an opportunity to spotlight GBV issues affecting female sex workers in their different categories including refugee female sex workers, and increase the level of public awareness, support and understand that human rights are non-alienable, everyone deserves equal rights, including but not limited to health and economic rights.

It’s disheartening to note that, FSWs including the migrant sex workers experience substantially higher rates of sexual assault (of 2-5 times) from, commercial clients and police than found among general female populations migrant sex workers face a multiplicity of vulnerabilities deeply entrenched in social stigma, patriarchy, punitive laws and policies and the discrimination from their host communities due to weak social cohesion.

GBV is tremendously linked to high rates of morbidity and mortality including gynaecological problems, mental health problems, substance dependence, suicide, and sexually transmitted infections including HIV. This presents a serious concern and needs for increased attention from stakeholders through a whole-of-society approach to combat GBV in all its forms against minoritized women.

We, therefore, recommend for:

We further call upon the public to publicly condemn all forms of gender-based violence and advocate for equal rights for minoritized women.