It is June 2022, and sex work and abortion are still illegal in Uganda. The Penal Code Act streamlines stiff penalties for indulging in sex work and procuring or performing an abortion. It is often said that the mark of a good law is that it ought to be progressive. Can a section of the law moored in ancient constructions of morality be said to be progressive? Sex work continues to be a risky business in Uganda. Sex workers have to contend with constant exposure to mental, physical and sexual abuse at the hands of their clients and law enforcement officers. Safe Abortions are inaccessible to the more significant majority of sex workers. On 8th June 2022, AWAC, in partnership with ARASA, hosted sex workers and medical practitioners to pick their thoughts on how post-abortion care can be brought closer and made more accessible and affordable. The participants hailed from different parts of the country; Sheema, Kyotera, Masaka, Wakiso, Busia.
We interviewed four sex workers, and these are their stories.

When young and free, you do not imagine life capable of unpredictability. I would not have believed anyone if they had predicted that my desire for fun would lead me into sex work, substance abuse, and addiction. Growing up, my father was present in my life. I was raised in a proper Muslim family. My six siblings and I didn’t lack. 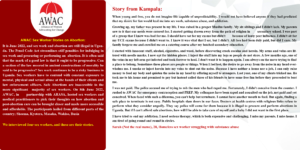 My parents saw to it that our needs were catered for. I started getting drawn away from the path of religion in secondary school. I was part of a group that I knew was bad for me. I should have sat for my exams but didn’t because of lousy peer influence. I didn’t sit for my UCE exams because I didn’t want to. I knew it was vital that I sat, but I didn’t. All fees had been duly paid, but did I care. My family forgave me and enrolled me on a catering course after my botched secondary education. I started with innocent stuff, alcohol, cigarettes, and weed, before discovering crack cocaine and heroin. My arms and veins are littered with needle marks. I now opt for hidden places. I inject the stuff into my legs so people do not stare. A few months ago, one of the veins in my left arm got infected and took forever to heal. I don’t want it to happen again. I am always on the move trying to find a place to belong. Sometimes these places are people or things. When I feel lost, the desire to go away from the noise in my head overwhelms me. I smoke or inject heroin into my veins to shut out the noise. Because I have neither a home nor a job, I can only raise money to feed my body and quieten the noise in my head by offering myself to strangers. Last year, one of my clients tricked me. He took me to his home and promised to pay but instead called three of his friends to have some free fun before they proceeded to beat me.  I was not paid. The police accused me of trying to rob the men who had raped me. Fortunately, I didn’t conceive from the counter. I rushed to AWAC for emergency contraception and PREP. My colleagues have been raped and assaulted on the job, not paid and yet conceived. When faced with such a dilemma, you can’t help but terminate. I cannot have another mouth to feed. But again, finding a safe place to terminate is not easy. Public hospitals slam doors in our faces. Doctors at health centres with religious links refuse to perform what they consider ungodly. They say police will come for them because it is illegal to procure and perform abortions in Uganda. But if I can’t afford safe abortions, how will I be able to take care of myself and a baby I did not want in the first place. I have tried to end my addiction. I need serious therapy, which is both expensive and challenging. I miss my parents. I miss home. I am tired of going round and round in circles.

Deep Blue Corner is a curious name for a bar. When someone mentions deep blue, you think of a nursery school, clinic, or beach shop. In 2006 I found myself serving at deep blue corner as a waitress. The bar paid me 15,000 UGX. This sum was insufficient to buy me decent food through the period or get me a place to rent. 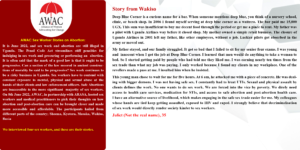 My father was a pilot with Uganda Airlines way before it closed shop. My mother owned a simple retail business. The closure of Uganda Airlines in 2001 left my father, like other employees, without a job. Luckier pilots got absorbed in the army or moved out. My father stayed, and our family struggled. It got so bad that I failed to sit for my senior four exams. I was young and innocent when I got the job at Deep Blue Corner. I learned that men would do anything to take a woman to bed. So I started getting paid by people who had told me they liked me. I was earning nearly ten times from the sex trade than what my job was paying. I only worked because I found my clients in my workplace. One of the revellers made a pass at me. I insulted him when he insisted. This young man chose to wait for me for five hours. At 6 am, he attacked me with a piece of concrete. He was dealing with bigger demons. I was not having safe sex. I constantly had to treat UTIs. Sexual and physical assault by clients defines the work. No one wants to do sex work. We are forced into the vice by poverty. We direly need access to health care services, medication for STIs, and access to safe abortion and post-abortion health care. I have an alternative source of livelihood, which makes engaging in the safe sex trade easier for me. My colleagues whose hands are tied keep getting assaulted, exposed to HIV and raped. I strongly believe that decriminalisation of sex work would directly render society kinder to sex workers.

My biggest desire right now is that my children never go through what I have had to go through. It is hard living life like this. The community thinks sex workers are lazy, dishonest people who want to make money the easy way. There is nothing easy about being shunned by the public. 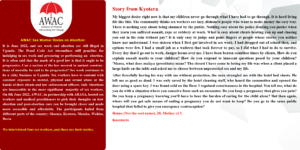 Nothing easy about the police denying you justice when they learn you suffered assault, rape or robbery at work. What is easy about clients beating you up and chasing you out in the rain without pay? It is only easy to judge and point fingers at people whose stories you neither know nor understand. I was sixteen when I first got involved in sex work. I had dropped out of school then, and options were few. I had a small job as a waitress that took forever to pay, so I did what I had to do to survive. Every day that I go out to work, danger looms over me. I have been beaten countless times by clients. How do you explain assault marks to your children? How do you respond to innocent questions posed by your children? ‘Mama, what does malaya (prostitute) mean? The closest I have come to losing my life was when a client placed a large knife on the table and asked me to choose between unprotected sex and my life. After forcefully having his way with me without protection, the man strangled me with the hotel bed sheets. He left me as good as dead. I was only saved by the hotel cleaning staff, who heard the commotion and opened the door using a spare key. I was found cold on the floor. I regained consciousness in the hospital. You tell me, what do you do with a situation where you conceive from such an encounter. Do you keep a pregnancy that gives you pain? Do you keep a pregnancy knowing you’ll have to bear the burden of caring for the child alone? But then again, where will you get safe means of ending a pregnancy you do not want to keep? Do you go to the same public hospital that failed to give you emergency contraception?

I am an AWAC peer mama, a fancy term for an ageing sex worker. Time has made me more understanding and kinder to my girls. I am HIV positive and engage in advocacy, training and generally looking out for my girls. I ensure that the condom dispensers are filled and that the girls have lubricants. I mobilise my girls for routine HIV testing. I am tasked with ensuring that HIV-positive sex workers can access antiretroviral drugs to keep their viral load low. I also ensure that my girls who are in trouble with the law have access to probono lawyers. And I also help younger sex workers find medical assistance like emergency contraception and PEP when they get raped. 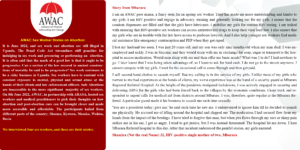 I lost my husband too soon. I was just 20 years old, and my son was only nine months old when my man died. I was unemployed and sickly. I was in Sheema, and they would sleep with me in exchange for soap, sugar or transport to the hospital to access medication. Would men sleep with me and then offer me basic needs? What was I to do? I had nowhere to go. I later learnt that I was being taken advantage of, so I leant to ask for hard cash. I do not go to the streets anymore. I cannot compete with my girls. I wait for the occasional call to come through and then get paid. I sell second-hand clothes to sustain myself. But my calling is in the service of my girls. Unlike most of my girls who narrate to me bad experiences at the hands of clients, my worst experience was at the hand of a security guard at Mbarara Regional Referral Hospital. At the height of the pandemic-instigated lockdowns, I was actively engaged in securing and delivering ARVs for the girls who had been forced back to the villages by the economic conditions. I kept track and responded to urgent calls for medical aid from districts around Mbarara. I was, therefore, quite regular at the Mbarara Referral. A particular guard made it his business to assault me each time sexually. ‘You are a prostitute today; give me,’ he said each time he saw me. I endeavoured to ignore him till he decided to assault me physically. He accused me of idling around the hospital and slapped me. The medication I had secured flew from my hands from the impact of the beatings. I have tried to forgive that man, but when pus flows through my ears or sharp pain strikes me in his ear, I get so angry. I tried to get justice, but I was instead threatened. The hospital let me down. I hate Mbarara Referral hospital to this day. After that incident understood the painful stories, my girls narrated.